As I looked up from the bottom of the stairs to the platforms, I died a little inside. How are we going to cover more than 20 steps in 5 minutes? Five minutes was all we had before our bullet train to Hamamatsu, Shizuoka left. I was with five other people, my mom, my brother, my sister, my uncle, and my mom’s friend, each of us carrying a luggage that weighed about 10 to 15 kilos each.

Our day started well, we heard mass, ate a hefty lunch, and finally left Keio Plaza Hotel at 1:00 p.m. in no hurry. We were to go from the Shinjuku train station to the Tokyo station and from there, ride the bullet train to Hamamatsu. Like a leisurely stroll in a park, the supposed 10 minute walk from our hotel to the station turned into 15. We had no time to keep up with – until we bought our bullet train tickets.

After another 15 minutes of figuring out the maze that is Japan’s underground metro, we finally reached the gates to the JR Line. I asked an information officer how I could buy tickets for the Shinkansen (bullet train). She said that I could either buy it in the ticketing office next door, or buy it once we were in the Tokyo station. I chose the first option.

In the ticketing office, my mom and I were informed that the next train leaving Tokyo for Hamamatsu was at 2:26 p.m.

I asked if we had enough time to get to it, and he shrugged it off like 40 minutes was a life time. In retrospect, as a tourist, I never should have listened to a local who’s probably been living fast paced his entire adult life. But I did, and so we bought 6 bullet train tickets for 8,290 JPY each. That was including the fare from Shinjuku to Tokyo. We said our thank you’s and went back to the rest of the group waiting by the platform gates. I distributed the tickets one by one and, in a fuss, prodded everyone to move quickly into the electronic gates.

In my worry and hurry, I forgot to ask which platform the Rapid Line for Tokyo was on. This was the second lesson learned: never forget to ask. So we all stand there like a bunch of lost kids on a field trip, looking at the signs and directions for the rapid line. Alas, I find platforms 11 and 12 and, with hesitation, went down the steps hoping that I would read the word Tokyo on the walls somewhere below. You know the names of places that they usually put underneath the platform numbers to tell you which big stations the train will be stopping at? I knew Tokyo should have been on the list for 11 and 12. It’s a main stop, for crying out loud! But in my desperation at catching the bullet train, I still went down, hoping that Tokyo will be in the more detailed list of stops. What a joke. Third lesson: keep your common sense.

What’s even funnier is that we actually waited there for a minute or two until we asked two locals for other platforms of the rapid line. The first person was a young lady who spoke no English and wasn’t really sure which platform we needed to be in, although she was kind enough and made an effort of googling it. I would have so done that if I only had data or wifi, or if I even had the time to pull out my phone. The second person was an old man who spoke impeccable English and was very sure that we had to transfer to platform 8. I swear to goodness, those were the longest three minutes of my life. When we finally set foot on number 8, it was 2:00 p.m. only 26 minutes left till our train in Tokyo Station choo-chooed (zoomed? –modernization and all) away without us.

I was going crazy, thinking that we were about to waste a total of 49,740 JPY – or add another certain amount to it, like a fee for catching the next train. Then again, due to my lack of research, I don’t know how the system works in Japan. But I digress. 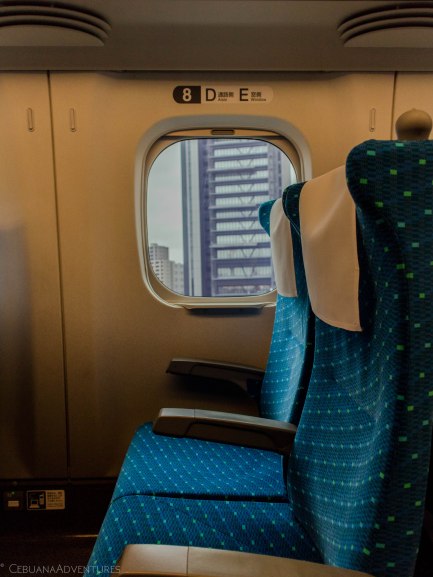 As I sat in the train going to Tokyo station, I counted the minutes that passed between every station. Four minutes, then five, sometimes three. I believe there were about 4 stations until we finally reached our stop. But the craziness didn’t end there. We still had to navigate the underground chaos and we had to do that in under 10 minutes!

I remember going down some stairs, going out one gate and into another, and then asking two different station staff which platform our bullet train was in, you know, just to be sure. We could have saved 2 minutes If I hadn’t. But if I hadn’t asked the second staff, the train would have left us because there I was standing at the bottom of the stairs, thinking how we were all going to carry our bags up there in less than 5 minutes – until the staff pointed behind me. There was an escalator that I previously had not seen. No joke, it seemed like spotlights were shining on the thing, telling me what a blessing it was.

I didn’t expect the train to still be there once we arrived, but it was. The funny part is that I went in the number 7 cart and came back out because my brother told me that our seats were in cart 16. Outside, I was turning around on the spot because I couldn’t find the 16th cart until that same brother suggested that we just get back in and transfer carts inside. We could have already done that a minute before, but all my common sense just goes out the window whenever I’m in a fuss. So we went inside cart 7 once more and covered two carts until the doors of the train finally closed. How horrible would it have been if we were still outside running towards cart 16? I was finally able to sigh in relief and laughed at how crazy everything was. Trying to catch the Shinkansen, in under 16 minutes, was a great big adventure all on its own! 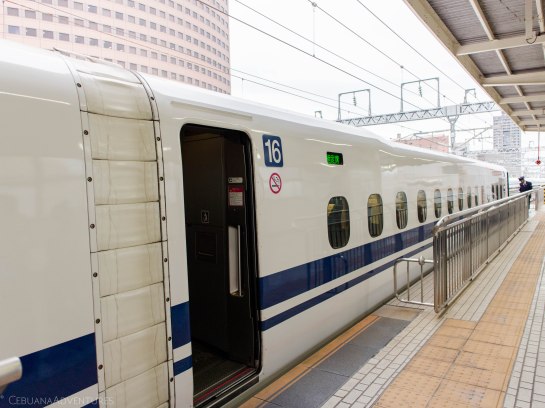