In every country that I went to, I made it a point to see the city from a different point of view. This has resulted to me bringing my family to the observatories of the Eiffel Tower, the Space Needle, the World Trade Center in New York, the Tokyo Tower, and the N Tower in Seoul.

For my trip to Taipei, it would have been against tradition not to do the same, even with the absence of my family. But because I had no one else’s company (read no one to share expenses with), I had to think of ways to see the city without breaking my budget.

Good thing I found two solutions to the past dilemma: 1. Brave the Elephant Mountain Hiking Trail and; 2. Reserve a spot for Starbucks on the 35th floor of Taipei 101. I’m proud to let you know that I completed both tasks. How’s that for extra?

There’s a funny story behind my quest to reach the start of the trail. I have Google Map’s inefficiency to thank for it!

I planned for my second day in Taipei to be all about the touristy areas, which included the trail. You would think that, because so many tourists have gone to the mountain, Google Maps would also be familiar with it and show you the easiest way to get there. Big NO. GM, which I will henceforth call the app, showed me the directions on which way to walk to Elephant Mountain. And of course I, being the extremely reliant tourist that I am, followed GM without question. She had me walking for 30 minutes!

I’m making sure that the same won’t happen to you though. Instead of walking from  the Taipei 101 building, as I did, you will need to ride the MRT to reach the Xiangshan Station, which is the station right after Taipei 101’s. I should have known this, since the trail is apparently of the same name!!! But it wasn’t like I was looking at the MRT Line-Maps to know it that well.

Once you get out of the station, proceed straight towards the pole where multiple bicycles are lined up. Just get to the end of the bicycle line and read the pointing signages from there. You can’t miss it. 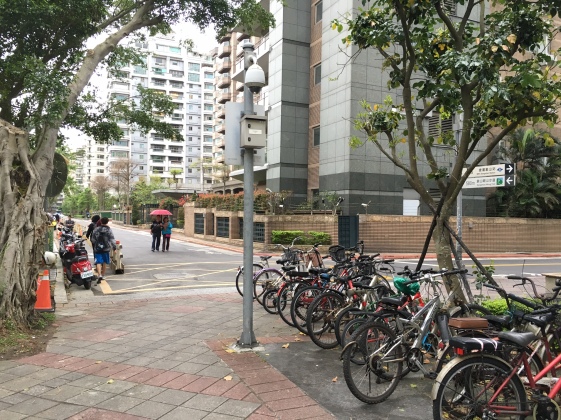 You’ll see that the trail is just 580 meters away. Follow the road until you’ll get to a fork, with one road going uphill. Need I say more?

Trust me, you’ll know once you’re there (or see this sign:) 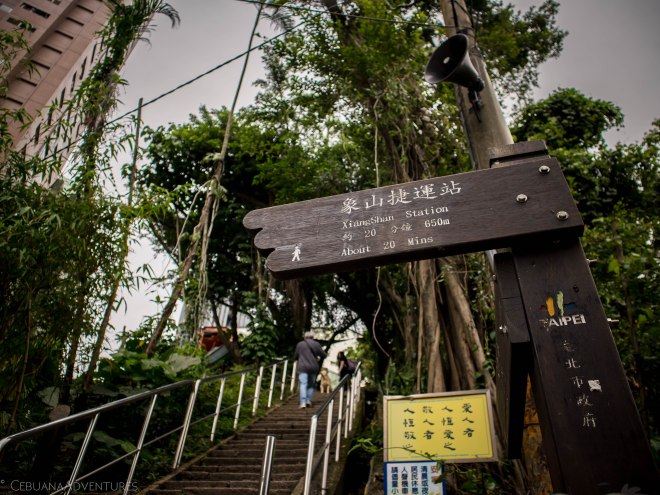 Arriving at the very top of the trail can take a while, and since it was raining, I didn’t give myself the privilege of time. I wasn’t about to throw caution to the wind and ruin my camera! So make sure you check the weather on the day you choose to go to the mountain.

Fortunately for me, the hiking trail has a couple of baby viewing decks before the ultimate viewing deck. Like levels before you reach the end of a video game (lol). So if you don’t have enough time to finish the entire hike, or if you don’t need the work out, the first viewing deck should suffice. On it you’ll still see this beautiful view:

The Starbucks on the 35th floor of Taipei 101

I’ve talked about this starbucks and how it’s one of the things I admire about the Taipei 101 building. But that post was a bit general and somewhat like an introduction to the basics: a 200 TWD minimum charge and a limited stay of 1 hour and 30 minutes.  On this one, you’ll know how you can get a spot up there!

By calling this number: +886 2-81010701 because guess what, getting into this starbucks is by reservation only.

Make sure that you call a day before your intended visit, because Starbucks won’t take on-the-day reservations. Although, there’s no stopping the daredevils from trying! Also be informed that Starbucks has a fixed schedule for your reservations, so you can only choose from 4 time slots on the weekdays and 3 on the weekends.

To make sure that you’ll quickly find your way to Starbucks’ designated waiting area, on the day of your reservation, it’s best if you enter through Door 7 facing Xing Yi Road or the door facing the SongZhi Street.

Once you enter Door 7, go right towards the security “round table.” Behind that is the waiting area, which is marked by a stand with this sign: 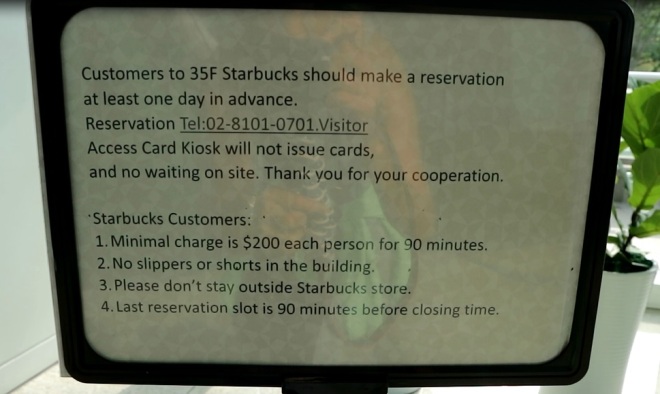 You’ll see that Taipei 101 has a dress code, and even though I did see a couple of tourists wearing shorts and slippers, it’s still better to abide by the code lest you lose your reservation. You wouldn’t want that to happen because up there is such a good viewing point, that is if you get a good seat.